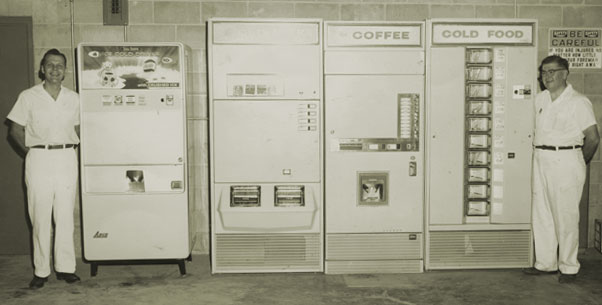 VVS was founded in 1961 by Wayne Davis and Gale Evans when they installed their first vending account in Cozad, Nebraska. Realizing the company’s potential, Wayne Davis soon purchased 100 percent of the business.

In 1968 VVS developed an amusement and games division and continued to grow the company in the following years through both vending and games. In 1979 VVS acquired its first dining account and Wayne Davis stepped down so his son Dick Davis could become President of VVS. Dick then guided VVS through a series of company acquisitions and territory expansions. His daughter, Kristen Jack, joined the company in 1991 and is now President of VVS. Dick remains the Chief Financial Officer and Chairman of the Board.

In 2001 VVS signed with Canteen, a global company, as a member of their Franchise Group. Today, VVS Canteen operates on a national level providing Dining Service, Micro Markets, Coffee Service and Vending to a diverse client base.